The Vatican’s Next Top Dog

Have you ever dreamed of living in Rome? Do you have an inner-confidence that allows you to feel like you are better than everyone else? Ever feel like you should be worshiped by millions? Do you look good in big hats? Then maybe you have what it takes to be the Vatican’s Next Top Dog!

Yes folks, it’s the reality show you’ve been waiting your whole mediocre lives for. Mediocre lives which are loved by God just a little bit less than God’s love for the Pope. Compete with other people from around the globe, and maybe some who came straight down from heaven. Contestants who look like ordinary humans like the rest of us, but consider themselves saints who one day, hope to have their ring kissed by strangers like a scene out of The Godfather.

But how do you know if you’re up to the challenge? Well, have you ever wanted to get away with previous war crimes and crimes to humanity and have everyone forgive you because the Church tells everyone it’s ok now? Then maybe Pope is the gig for you! Have you ever wanted to posses magical powers like Superman and leprechauns? The Pope has them. Ever wanted to live a completely corrupt life while having people believe that it’s all ok because you are part of the Catholic Church? Well, actually, you could just apply for a Cardinal or priest position, but that’s another show. Do you like to wear gold and lots of bling that poor people pay for because they believe in God and the faith that their God represents ? Guess what. So does the Pope.

Yes folks and believers of  fairytales, your time to shine is finally here. Compete in weekly elimination rounds that will prove to our judges, and America, that you have what it takes to be the Vatican’s Next Top Dog.

Tasks such as waving. 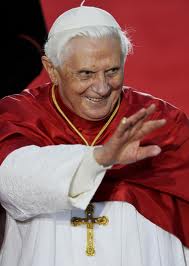 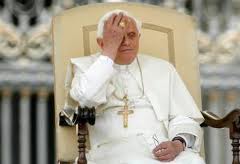 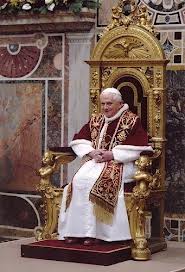 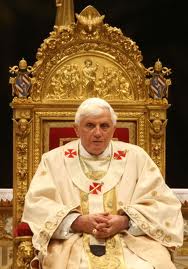 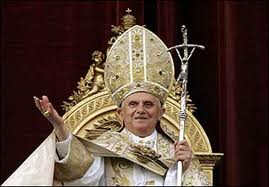 and yes… allowing the Dark Side of the Force to flow through you. 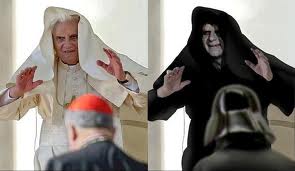 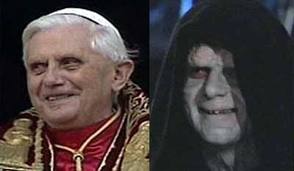 Be judged by other people who truly believe they act on behalf of God and feel they have the right to judge us regular mortals because God told them to. God speaks to them and through them, but don’t worry because that is not remotely crazy. Our celebrity panel will include Tea Party leader and expert of how the female reproductive system works, Todd Aiken. Rick Santorum who firmly believes”  “I don’t want to make black people’s lives better by giving them somebody else’s money”. Westboro Baptist Church leader Fred Phelps who believes that the children who were murdered in Newtown, CT. had it coming because he knows for a fact that. “God Sent the Shooter,” and wants us to “sing praise to God for the glory of his work in executing his judgment.” Of course, it wouldn’t be a panel without famed ex-Vice Presidential candidate, Sarah Palin who can see Russia from her front porch in Anchorage. No one loves God and hates gays more than this all-star panel! If these folks can’t tell you who God’s next Chosen One is…well then I don’t know who can.

Join us on God’s Channel, Fox News, as we air the most exciting televised event since what would have been the Resurrection of Christ, had Rupert Murdoch been around to exploit it. It’s The Vatican’s Next Top Dog. To find out where local auditions will be held, call 1-800-VATI-CAN.

What are you waiting for? The power of Christ compels you. You know it does. Call now. Your potential millions of blind sheep await your next instructions.

Hey there! I'm told I write good and stuff, so here I am, attempting to do that. I run a management company called FlyingFox AB based out of Stockholm, Sweden where I manage some well known bands, musicians and artists. I also offer services in consultancy, tour, production and event management. Currently, with all of this Covid-19 nonsense going on, I've found myself with quite a bit of time on my hands. This thing has knocked myself, and so many others completely off guard for those of us that work primarily in the live music, art and entertainment sectors. My latest attempt to make sense of it all is via Venting Post 16. Previously, I ran a blog called The Playground, but that's when I was young and full of hopes and dreams. It's still there if you're looking for Haikus about Drake or horror tour stories. But for now, that's on the back burner. This virus has crushed so many of us. Have a look around and get the real deal from the professionals who have been directly effected by this fucker. Oh yeah, there's cursing. So if that offends you, best not go on.
View all posts by Erin →